Our travels took us to a small town called Mae Sariang in Northwestern Thailand where we heard there was still an opportunity to do ‘authentic’ hill-tribe treks. Not sure how one defines authentic exactly but basically something not pre-packaged, seeing villages where you are not expected. Last year, Marc and I did a 3 day hill-tribe trek outside of Chiang Mai. While we did have an incredible experience, we were part of a typical circuit that allows the tribes to make money when you buy beer and goods that they have made. We in fact did not see any villagers or ‘authentic’ sites. It was more entertainment for foreign tourists. This time was much different. But let me back up…

After being quite travel weary, we decided to splurge on a $20 hotel  room in Mae Sariang called the Riverside Hotel – it was an old teak house with a beautiful view over the local river, a real mattress and in general a nice romantic feel to it.

We relaxed, wandered around town looking at various trekking options, somehow got invited to a Buddhist funeral for ‘auntie’ and found a nice curry restaurant for dinner. I also gave up on my far-flung idea of growing my hair out for an entire year. I just couldn’t handle it. I walked into the barber-shop next door and tried to explain how I wanted my hair cut to a guy who didn’t speak any English. Ultimately I ended up looking like Hitler but how could I blame the guy? I really enjoyed the open-blade shave too. $2 for a haircut and a shave, not bad!

We ultimately decided on a trek run by Salawin tours, despite some interesting observations about the owner himself…. We were told this was very authentic, in fact visiting a town that the guide had never been to. Red flag or opportunity? There would also be no rafting or elephant rides involved (typical of the prepackaged tours), only trekking and hill-tribes. We dropped off our deposit and decided to roll the dice.

The next day started without flaw, except for Autumn’s little accident before we started trekking. In the essence of decency, lets just say she fell and became entangled in a thorn-bush while on a little stroll by herself. 5 days later as I type this she is still pulling out the remaining pricks. Despite this little set back she maintained quite a positive attitude despite not being able to sit comfortably for 3 days…. After a quick stop in a town for supplies and lunch we came across our first village – this village had road access so it was not all that remote – but we did stumble upon the local school where the teachers spoke English and explained to us how things worked. Several years ago the government stepped up its support of these villages, providing schools and teachers from the cities to help educate the youth. We also learned that each of the villages

we visited received electricity for the first time just one year ago! We proceeded from there, slogging through mud and rain to a beautiful waterfall where several of us stripped down to take a swim in. Our awesome guide Wind climbed several trees to pull down fruit for us to snack on along the way. Wind explained to us how he was the only person in his village who could speak English, and he learned it by reading a dictionary over and over again and slowly practicing whenever he could – unbelievable… After walking through more forests and rice paddies, meeting farmers and others we eventually made it to Wind’s home village, Meheki, where we learned we would be sleeping with his family! There were six of us – a great group of 3 Americans, 2 Brits and a Fin. Wind lit a fire for us to dry our clothing as we surveyed the town. It turns out that we were quite the spectacle as farang (white folks) had not been seen in the town for 2 years, and several town residents had never seen a white person! I learned that the kids in every village loved to play hide and seek with this crazy looking white guy with a Hitler hair cut. While I was sad I didn’t have anything tangible to give them, we shared some great laughter and games.

Life moved at a very different pace in these towns – the pigs and chickens wandered freely about, the men and women worked very hard in their rice fields and subsequently their homes. The stove consisted of an open pit fueled by wood, the outhouse was down the hill by the pig shack. People went to bed at dark and as we quickly learned, woke up at 4:30 when the first roosters began their rounds. Our group had many conversations around the usual crux for these few remaining ‘authentic’ tribes – that being modernization. By our standards their system is pre-industrial revolution, no shared tasks, each family doing everything from from end-to-end. The healthcare is woefully inadequate, sadly we saw many old people with badly bleeding mouths and strange diseases that I have never seen before. Yet, these people have been doing this for hundreds of years without any help from the outside- can you bring modernization and still hold onto traditional culture?

The second day we meandered through more amazing rice fields and mountains, dealing with leeches along the way…. at one point I had 4 or 5 attached to my shin enjoying themselves. Despite everything I had imagined about leeches, it really wasn’t all that bad as long as you caught them early. 🙂 Overall we walked a total of about 16 miles over the 3 days and it was quite challenging. The second evening we walked into a village unannounced and Wind located a friend of his grandmother’s who agreed to put us all up again for the night. So our group of six piled in with a family of 8, a herd of pigs and chickens and some nice wooden planks to sleep on. Our host was fantastic – she found some rice-whiskey for us, helped our guide cook us dinner and always had a huge smile on her face. She spoke to us in her native tongue as if we could understand and we had fantastic ‘conversation’.  That evening we strolled around the misty town, watched a nice sunset as the clouds parted for a few minutes and watched life go by as it has for years in this place.  The next day we woke to clear weather, and enjoyed a nice walk through the mountains and rice paddies, swam in another waterfall and eventually made it to a town where we had a bowl of noodles before catching our ride back to town. 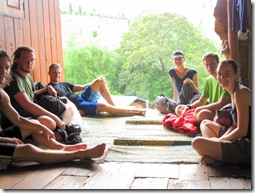 I’m still processing a lot of what I saw and thought about over those 3days- the intensity of what I saw is still quite raw. Especially in contrast to the easy life that I’m living now in Thailand, and in light of my search to give back and help. If I so desired, I could volunteer starting tomorrow. I think I’m still in a bit of a gathering phase – I’ve met several like-minded travelers who are also trying to figure out where and how they want to help. The consensus I’ve received thus far is get your travel out of the way first, get over the wanderlust, find a village or area that you connect with, then see how you can help. Maybe that’s an excuse not to settle in? I’m not sure. Back to the old movement versus stillness conundrum…  comments welcome!

One thought on “Hill Tribe Trek”

A Field of Potentialities