** Note: I typed most of this on July 17th but haven’t had a good Internet connection since.

I’m typing this from the deck of a long-boat cruising the Mekong river from Huay Xia to Luang Prabang in Laos. Its a two-day journey along this ancient river that runs from China, past Burma, Thailand, Laos, Cambodia and eventually Vietnam before existing into the sea.

Although not the most exiting journey (there really is NOTHING out here), it has been very peaceful. I finished reading Siddhartha last week and for those who have read it,  I am starting to understand what it means to listen to a river. Time slows, scenery blends, and its just floating in the moment, literally. Although crammed on the boat with many other travelers and locals, there is this sense of camaraderie that exists as noted when a monsoon rain hit and we all had to shift seats as the front half of the boat became flooded. We have been passing small fishing villages, rice fields and a whole lot of jungle. Some may laugh, but ‘floating down the Mekong’ was one of the mini-goals I had before leaving. I’m not entirely sure what Laos has in store yet, but from my research it appears that boat travel is often faster than road travel during the rainy season.  How did we get here you ask? Not easily.

Two days ago we left Pai, Thailand, taking a nauseating overnight mini-bus to the Thai/Lao border where the next morning we were herded like cattle towards the ferry. There are about 10 tourist scams you have to pass through in order to get your Thai exit stamp, Lao visa and boat ticket. A group that we met on the mini-bus stuck together and we managed to get through with only a slight premium to the hawkers. So now we float down the river for two days, stopping at a small town halfway for an evening, and then landing in Luang Prabang tomorrow. Then its off to explore Laos.

Backing up a bit to Pai – Autumn and I spent 4 nights there and really enjoyed it. Its a bit of a traveler’s mecca, a small town of about 3 or 4 thousand nestled between hills and winding rivers. We found a nice bungalow on the river and decided to stay put and do some of the things we had been looking forward to doing in Thailand – Elephant riding, rafting , Thai massage and cooking school. Pai is definitely on the tourist trail, and apparently can be packed during the high season (Nov-Mar). While there were a lot of tourists, it felt like a small town that I could imagine spending a lot of time. There were still plenty of locals doing there thing, and thanks to the tourism boom there is healthy competition amongst guest houses and restaurants, making for quality accommodation and great food. There were definitely a lot of long-term western visitors, and after going to Chiang Mai last year I have to say that Pai has all of the cool aspects of Chiang Mai without the big city annoyances. I’m not sure I’d want to be in Pai during the high season as the town looked like it could turn into quite a party scene, but in July it was nice and slow, and we got used to seeing the same people walking back and forth around the towns 3 or 4 streets.

The bad news first – I spent the first day and night wandering between my bed and the toilet. I can no longer say I have never gotten TD (Traveler’s Diarrhea), something the CDC says gets 30-50% of travelers within 2 weeks of going to a 3rd world country… I cant complain as I had been breaking all of the rules – ice, fresh vegetables and fruit… I also drank water from the hill-tribe villages. Fortunately it wasn’t horrible and I didn’t have to go as far as taking Cipro (strong antibiotic). I was out of commission for a total of about 36 hours but it left as quickly as it came and I was glad to be in a comfortable town where I could be sick and still have a nice view 🙂

Now the good news! We had several adventures in Pai – first we spent a day at an elephant camp, riding and swimming with elephants. I honestly was skeptical at first but Autumn really wanted to do this. In the end I had an incredible time – the elephants would flip you over their back with their noses and let you try to ride them as the shook you off in the water. They were incredibly gentle and our guides were quite amusing as they ate what I think were magic mushrooms growing out of the elephant poop along the trail… the next day we took a cooking class at Pai Cooking 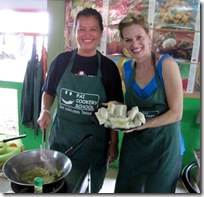 school where we learned how to make (and eat!) five different Thai dishes.  Our chef Daew also took us through the local market and explained many of the exotic things for sale to us. Those were the highlights – there were of course massages and fantastic meals. We found a small restaurant called “the House” where we became daily regulars. As I did in Japan, I found it necessary just to exist for a few days, catch up on sleep, eat healthily and exercise.

Not too much as for ‘insights’ in this post – I must admit having a travel partner has taken away a bit of my dependency on blogging as a therapeutic outlet!Autumn and I have been having amazing conversation about our experiences, our paths and this journey. Not too mention I’m simply not sitting around comfortable trains and hostels with my laptop open as often as I did in Japan.

I promise to bring all my faithful blog followers up to date soon!

3 thoughts on “Travel Update from Laos”

The Religion of Tomorrow – A Book Review