Sometimes when you are feeling very emotionally drained you just have to put your thoughts aside and do something to relax. Watch a movie, go for a walk, call a friend or eat some yummy food. After my two nights alone in Munduk and some intense reflection I decided I could really use some social interaction to get out of my head. I drove my motorbike down the mountain to Lovina, a long stretch of beach in scarcely populated Northern Bali. I quickly discovered that almost overnight the high-season had come to an end, there was a lot of good, comfortable accommodation available and a great backpacker vibe with restaurants, bars and cafes. I quickly manifested my desire to meet people, befriending an Australian at lunch who had been traveling for 15 months already to many of the places I am intending to go. We had a great conversation, agreeing to meet up later with a few other people for drinks. Turns out its quite a small town and after 24 hours I had formed a clique of people at my hotel- myself, an Irishman, a French woman and a German woman, with occasional appearances from a Canadian and another Australian. Planning on staying 2 nights, I remained for 4. I enjoyed the regularity of having people to dine with, lounge on the beach with and to go on random adventures together like snorkeling, fishing and bar hopping.

My days were very routine – sleep in, breakfast, Internet, swim, lunch, siesta, beach, yoga, sunset, shower, dinner, gambling on the beach with the locals, drinks 🙂 I kept myself out off of the computer other than to Skype family and friends and away from the guidebook. I sought some intellectual stimulation through Sudoku and conversation. My final evening I overheard someone say “I need a holiday from my holiday“ and instantly had my blog title! And Lovina truly was that – a place to rest, mingle with locals, make friends and enjoy great cuisine. I allowed myself to be OK with idle time (something I generally struggle with), go with the flow of the other travelers and spend time conversing with locals even when 9 times out of 10 you know they just want to sell you something. Nothing very exciting to blog about – probably the most interesting thing I saw was a modified game of roulette translated as ‘fair ball’, where you gamble on colors and numbers. We were entertained by the game and the locals were entertained by us. We would get all excited and they generally remained very cool, despite some of them losing half a months salary in an evening…

I must admit I’m leaving Bali with some great memories. Never intending to come here in the first place, I ended up stretching out my visa to its final day. I’m already wishing I had purchased some of the amazing art work or crafts and definitely wish I had taken more pictures! The problem was I generally was cruising on my scooter cruising by at 60k. I saw women with what looked like 75 lbs balanced on their heads, ceremonies everywhere, families of 5 plus their gear on the same scooter, cocks fights on the side of the road, men carrying unimaginable loads of wood or bamboo, people

constantly at work with their sickles, and much more. Off the tourist track it was very easy to glimpse the real Bali, watching village and family life unfold before your eyes. Even in the smallest villages someone could speak a little English and point me in the correct direction. One of my favorite scooter memories was leaving Munduk and driving through the villages where clove, nutmeg and vanilla were drying on the sides of the road – delicious! Also my final day on the motorbike I followed a guidebook recommendation and drove this absolutely amazing windy road  through the hills, passing volcanoes, rice paddies, waterfalls, and small villages while breathing in the crisp air. The children on their way home from school would all wave or chase after me in their colorful uniforms and every time I stopped to gain my bearings someone would almost immediately help me before I could ask.

The people truly are happier and friendlier than almost anywhere I’ve traveled. They are also close to the poorest. We all know that money doesn’t by one happiness, but there is a general standard of living that is generally necessary to provide a so-called ‘happy’ life. Yet despite the majority falling significantly below 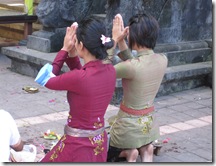 this standard, they were living a life of peace and love. There are many factors, more to go into with my limited view. One that struck me the most was the constant offering process, always paying respect to the gods and the spirits. Meaning that despite how poor you were, there was still a concept of a connection to something larger that you recognized and respected through these offerings – material offerings and offerings of their time through ceremony. Another powerful thing was that extended families lived in ‘family compounds’, each having their own temple and it was not uncommon to see 4 or even 5 generations together in the same place. Who knows the secret formula – but its worth investigating! Put Bali and Indonesia on your travel list, you will not be disappointed.

I realize this isn’t the most inspiring entry I have written in some time so I apologize for the drab, update and detail variety. I’m now back in Bangkok, spending a couple of nights taking advantage of her wonderful offerings and then shipping out north on a course for China and Mongolia. A friend from high school, Wei, who I haven’t seen in 10 years was waiting for me at the airport and we’re going to team up for a while. She just started an open-ended, round the world journey of her own. Through the magic of Facebook we uncovered that riding horses in Mongolia was a life-list thing for both of us – so off we go.

2 thoughts on “Holiday from my Holiday”

The Religion of Tomorrow – A Book Review