It has been a quiet, contemplative past month. I’ve been trying to pick up the pieces and nurture a broken heart. I’ve been reviewing life notes, looking for more blind spots that might exist in my perception of the world and my relationships. This past weekend I returned from a weeklong meditation retreat with my Zen Teacher at Crestone Mountain Zen Center where I had an opportunity reflect deeply on the past and felt the urge to update you.

Returning to March, once the decision was made for me to move back to Boulder, events occurred at an incredible pace.  I was offered a place to stay in South Boulder by my good friend and dharma buddy Jamie and his girlfriend Cheryl. I quickly began to pack up my things as the little yellow house in Denver was just an overwhelming symbol of a failed relationship and it was energetically not a place I wanted to spend time.

I did what I should have done two years ago before my long trip abroad: sold off or donated over half of my possessions.  Using Craigslist, I managed to sell almost every large item of furniture I owned, painfully saying goodbye to a nearly brand-new mattress, the faithful IKEA furniture that has been with me since my first apartment in Pittsburgh and a number of odds and ends that I have simply been dragging from storage area to storage area without ever using. What didn’t sell went out on the curb or to Goodwill. When it was all said and done, I managed to pack everything I own into a van and drive it up to Boulder.  The general rule of thumb was that it if it didn’t fit into a Rubbermaid bin and it wasn’t a pair of skis or a bike, it had to go. My material life now neatly fits against the basement wall in Cheryl and Jamie’s basement, about 20 such bins of assorted colors containing books, clothing, a few kitchen items, camping and climbing gear.

Why would I sell off everything you ask? Doesn’t one need a kitchen table and mattress and a chair or two? Well yes, I do, but, with the horizon for me containing a lot of uncertainty, including several open-ended international trips, it simply made sense to consolidate. Craigslist works two ways, and when I am in need of such items, I will find nice, recycled furniture for a fraction of the cost of something new. For now, I feel a sense of relief, as I will not be dragging items around or burdening friends with my stuff.

But enough about stuff.  One thing I did learn through this process is that it is quite easy to divert attention from one’s heart and emotional body to one’s material and physical body. Part of this was a coping mechanism, being in shock, hurting so badly it was simply easier to turn a way, to focus on the material details of living and my possessions. Once the dust settled I found myself in Boulder with nothing to distract myself with, I decided to try the opposite approach and just sit with everything. I’ve renewed my commitment to the Boulder Zen Center, sitting frequently during the week and becoming more involved as treasurer of the board of directors. I cook regularly, experiment with new Indian Chai recipes and often take Sherman the dog over to the park to sit in the sun and reflect. I have been able to untie some emotional knots, to shed light on several serious misconceptions and worldviews of mine, ever so subtly developing a feeling of growth and moving forward. My network of support has been incredible, always providing me someone to listen or to provide kindly advice.

With some hesitation around interrupting such a simplistic pattern of living, I agreed to accompany Jamie on a road-trip through the deserts of Utah and Nevada to tackle some slot canyons and meet one of his friends at the Red 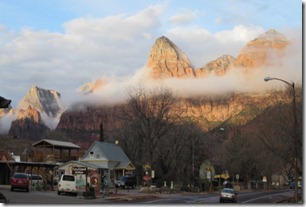 Rocks Park outside of Las Vegas to rock climb. We had a wonderful adventure, battling an unseasonal cold front that brought many frigid evenings and rain several times. Luckily, neither of us were attached to a specific itinerary and we simply adjusted. When the temperature is in the 30s you can’t really explore the slot canyon full of water or when it rained last night you can’t climb on brittle sandstone… so you improvise.  A couple unplanned nights in a hotel and some shifting plans yet we still had a wonderful time. Jamie being a fellow Zen practitioner, my favorite part of the trip was our endless discussion on the human experience and all the great questions that accompanies it.

I was able to get my first intimate look at the deserts of Utah, driving through and exploring Zion National Park, Jamie’s proclaimed favorite place on the planet, and one that I will be sure to return to when I have more time and a better weather outlook. 3000 foot walls of sandstone surge out of the ground straight to the heavens in one of the most dramatic settings you can imagine!

So while rain in the desert can negatively impact ones trip (wet rock, impassable roads, flash flooding, on and on)…. it does hold the key for life-anew. I’m sure the rain of that week and the warm temperatures of the next would result into beautiful dessert blossoms.

In my next post I will attempt to go into my experience at sesshin (meditation retreat), and my spiritual life in general as of late.

One thought on “Rain in the Desert”

A Field of Potentialities